Discover the Soviet Pantheon in the Kremlin Wall Necropolis

You can hardly imagine more different individuals then Soviet leader Joseph Stalin, Yuriy Gagarin, the first human to fly to space, and Arthur McManus, a Comintern member. Nevertheless, they were brought very close together when buried in the Red Square. The site known as The Kremlin Wall Necropolis (or Red Square Necropolis) is where Red Russian elite, scientist, bureaucrats, strongmen, cosmonauts, and simple grassroots soldiers are buried. It is a place from a different era, whose dawn and sunset coincided with those of the Soviet state.

Moscow’s Red Square is without any doubt a postcard view which comes to mind first when you mention Russia. Its garish St. Basil cathedral exudes old Muscovite piousness and you can sense the aura of impregnability around the red-walled Kremlin.

It was not always so. After the Bolsheviki uprising started in Petrograd, today’s St. Petersburg and then Russia’s capital, and the insurgents overthrew the Provisional Government, Muscovites captured the Kremlin, defeating the forces loyal to the ousted cabinet. Those who died in the battles leading to the capture were given in-state funerals on the Red Square by the new authorities, as soon as they gained upper hand. John Reed, an American communist and the author of “Ten Days that Shook the World” writes that they were hailed as heroes by crowds of grieving Muscovites who came to pay them tribute. They were first to be inhumed by the Kremlin’s walls, and their mass graves are still there.

Those who rest in the Kremlin Wall and Soil

New fighters for the proletarian cause, politicians, scientist and cosmonauts followed in their steps, so to speak. They would be buried in the Kremlin wall or below apparently without any traditional religious burial ritual, often cremated, a due course for an atheist state.

Ironically one of the observers of the first burials taking place on the Red Square John Reed was buried there himself, after catching typhus on a diplomatic mission to Soviet Russia. He is one of many communist from outside Russia who must have rooted for the Proletarian dictatorship deeply and whose remains are at the site, others include Bill Haywood, Jeno Landler, Arthur McManus, Charles Ruthenberg, Otto Wille Kuusinen…
But the locale is primarily known for its Soviet dead.

Those who lie in the Wall

Russian writer and politician Maxim Gorky, USSR field marshal Konstantin Rokosovskiy, rocket engineer and spacecraft designer Sergey Kovalev, and first-man-to go to space Yuriy Gagarin are immured in the eastern wall, among many others of mostly Soviet communist elite. The last person buried inside the Kremlin ramparts is Dimitry Ustinov, entombed there in 1984.

Those who lie below the Kremlin Wall

Kremlin Wall Necropolis serves as the burial ground for all Soviet General Secretaries deceased by now, except for Nikita Khrushchev and Vladimir Ivashko, who did not stay in power until death like others.

For sure no place of eternal rest is paid so much attention as that in front of the row of bust-crowned tombs belonging to Vladimir Ilyich Lenin, a politician regarded as the main ideologue of the Soviet State. He lies in Mausoleum, visible to all, under a glass shell. Even though it is thought that he wanted to be buried in what is now St-Petersburg by his mother, the Soviet establishment decided to make him a state symbol. His body was first laid out in a wooden mausoleum and then transferred to his current stone-made impressive tomb. His body was whisked out of his tomb for the period of WW2 and soon returned. This evacuation was necessary to ensure that Lenin’s remains would not be destroyed during the intensifying bomb-blasts and other hostile actions by Nazi Germany.

One of the bodies actually has once changed its address. Stalin’s body was first tucked on display beside Vladimir Lenin’s, but destalinization effort, initiated by Khrushchev, led to the body being spirited out on one of the nights back in 1961 only to be put into the ground a few meters away between Mausoleum and the Kremlin.

For many decades, Soviet and Russian leadership have stood atop Lenin’s resting place, to watch the military parade on the Victory Day. It has thus become not only a place of commemoration of one of the 20th century most controversial political figures, but also a symbol of continuity between Soviet and Russian states.
Even though Lenin’s family, particularly his wife and daughters protested the decision to place the remains of the Revolution Leader on open display, Soviet authorities were bent on making him an essential part of the state imagery. The best way seemed to expose his embalmed physical self in a glass sarcophagus in the very heart of USSR’s capital.

Vladimir Lenin is not forgotten and millions visit him annually, but the location of his remains sparks controversy. There have been calls for the remains to be reburied according to the Christian tradition at a cemetery.

The forgotten and unknown

The names of those who were dumped in the mass graves in the first years of the Soviet rule, after being killed on the battlefield or in a brief skirmish in a quiet muscovite lane are still unknown or already forgotten, but it was for them that the tradition was started. They together with other more famous people buried in the square are all part of an epoch of which the last true reminder is the Necropolis, Mausoleum and its embalmed fixture, plus dwindling architectural heritage strewn around the city.

Slowly the marchers came with their coffins to the entrance of the grave, and the bearers clambered up with their burdens and went down into the pit. Many of them were women-squat, strong proletarian women. Behind the dead came other women-women young and broken, or old, wrinkled women making noises like hurt animals, who tried to follow their sons and husbands into the Brotherhood Grave, and shrieked when compassionate hands restrained them. The poor love each other so!
– John Reed, Ten Days That Shook the World

To see the Red Square Necropolis you have to actually get to the premises of the Mausoleum. The easiest way to get to Red Square is by metro. Nearest metro station is Okhotniy Ryad, located on the Sokolnicheskaya Line.
The line to Mausoleum usually starts between the corner (Round) tower of the Kremlin and the State History Museum.
Once there, head for the metal detectors at Nikolskaya Tower.

If in the past visitors were supposed to check in their video and photo devices at the Museum of History, recently the checkroom has been closed and you are allowed to carry all your photo and video equipment with you. The only prohibition left is that you are not allowed to use it inside the Mausoleum. 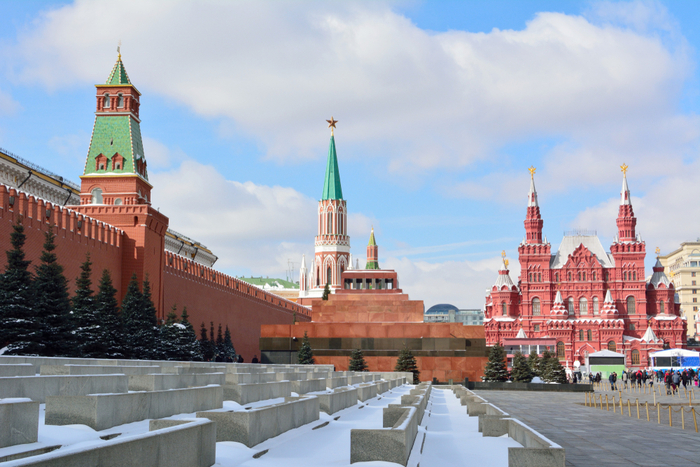 Halfway along the wall is the Lenin Tomb. Going inside you will be plunged into darkness, if it has been sunny for a while you may struggle to see. Not all steps have lighting on them. Just grope your way down along the walls. During your descent into chilly marbleness you will see the uniformed soldiers but they are there to keep you moving not to assist. Finally you can see the old man with his somewhat ginger moustache trimmed and his hands on his thighs, appareled in a solemn black costume.
You should move down along the left side of the enclosed open glass casket, around the leader of the world proletariat’s feet and up along the right side. At your slowest pace you hardly be able to spend more than a minute around the glass sarcophagus. You are then routed out into the open. The stretch of the Kremlin wall nearest to the Moskva River will open up before you. It is here that famous Russian cosmonaut Yuriy Gagarin is immured next to the marshals of Soviet Union and other prominent soviet citizens. You can usually spot Gagarin’s grave by the abundance of flowers. Somewhere near are Maxim Gorky, Sergey Kovalev, and Konstantin Rokosovsky.

Visiting Tips and What else to see

The Kremlin Wall Necropolis is one of the most popular places to visit in Moscow, so the lines can be long. The Mausoleum queue starts at Arsenalnaya Tower (Kremlin round tower), where the security guard stands.

Queuing for hours is not the norm on work days off-season. But in summer and late spring, or on public holidays or weekends throughout the year the lines can be tiring. Midday the rush-hour, if your visit falls on one of the more busy periods take care to arrive in advance.

Note that the Mausoleum schedule is fixed.
You can visit Lenin’s Tomb and Kremlin Wall Necropolis daily, except for Mondays and Fridays, from 10 am to 1 pm.

Some Other Moscow Soviet Attractions 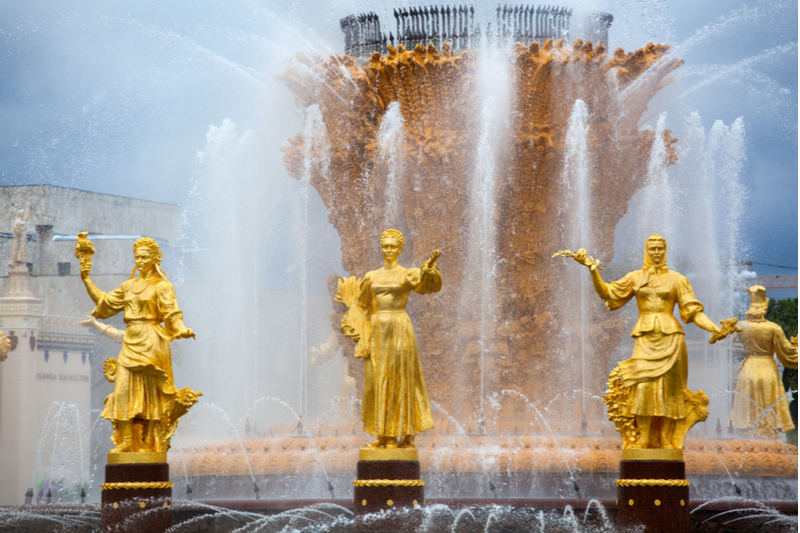 The site by the Kremlin walls is that lets you know the scope and greatness of Soviet civilization. The other such spots include VDNKh (also known as All Russia Exhibition Center), Soviet Stalinist skyscrapers and Moscow metro. If doing sightseeing on the Red Square note that in the vicinity there are many localities worth visiting; don’t miss out on the History Museum, situated nearby, and the Alexandrovskiy Sad, a garden by the Kremlin.

For sure there are few things as pleasurable as a stroll around the Red Square with no one but yourself, but discovering the burial places on your own may be fairly challenging.

Note that the inscriptions identifying the immurements and other burial places are in the Cyrillic alphabet. It might be best to either print the names of concern in Russian or to hire a private guide in Moscow for them to show you along the Kremlin Wall.