Yes, it is true that we Russians like to drink. But far more interesting are our drinking customs. Every spirit should have its own consuming pattern: how much you should drink in one sip, what snacks you should munch after, and in general, what constitutes the best reasons and surroundings for drinking? What are the preferable snacks and other appetizers for the drinking Russian-style?

The origins of Russian drinking tradition

Alcohol in the Ancient Rus

If you ask foreigners, which word comes the first in their minds when they hear Russia? Their answer is Vodka. But historically, Vodka wasn’t as popular in Russia it is now. In times of the Ancient Rus, most of drinks were low-alcoholic, made mostly of honey. The most notorious of them was Medovukha. It is a wine made from honey that were brought to Russia by its Varyag (Vikings) founders and evolved with time. It is an ancient drink, which has its own shape and brewing recipe in every historic region or even town – same as wines in France can vary by region and chateau. Each Grand Principality in the Ancient Rus posessed its own recipe.

Unlike wine, due to the specialties of its raw material – honey, Medovukha is not being aged. It contains 5-25% alcohol and in terms of drinking it goes somewhere between beer and wine.
However, unlike Vodka, you will not be likely to find Medovukha in common shops in Russia. Why is it so? The first reason for this is because to produce medovukha, it is way more costly than wine and other liquors. The seond reason is, that today in Russia most of ancient Medovukha recipes are fogotten, and the Medovukha brewing tradition remainsstrong only in two historical towns – Suzdal and Velikiy Novgorod.

In 14th century, merchants from Byzantium brought grape alcohol – vine stocks. However, grapes were not cultivated in the Russian Territories – and thus it was an expensive festive drink for the upperclassmen – Russian Princes and their retinues (Druzhinas). Everything changed it the 15th century, when the secret was discovered to produce home-made moonshine out of bread. It was far cheaper to produce than wine and Medovukha, and could have been made at home by almost everyone.

The Birth of Russian Vodka

The Tzar Ivan IV, also known as “Ivan the Terrible”, decided to control this moonshine business by forbidding illegal production, and he ordered to set up local taverns – “Kabaks”. Aside from selling alcohol, the services these kabaks offered also inсluded gambling, money and grain loans, and sometimes prostitution. Life was hard in Tsarist Russia for common folk – and many men were going to Kabaks to drown their daily worries in alcohol – peasants, wanderers, soldiers, bandits. Sometimes, even monks and impoverished nobles. Histocial outlines says that in 18th century, depending on the source, from 40% to 75% of all Russian Empire male population were in debt to Kabaks. Explore the modern Moskow Kabaks after taking a fresh air with at Moscow Night Tour!

In the middle of 19th century, Vodka was the source of 40% of the government’s revenue. Many writers of this time already depict drinking in Kabaks as a vice. But do not misunderstood – they were not referring to the harm alcohol does to health, but mostly to Kabak debts, the dire situations it placed people.

However, everything have its pros and cons. Because of centralized production, bread moonshine became more refined, and soon evolved to the drink associated with Russia in the world today – Vodka.

Nowadays, you can find Russian Vodka everywhere, even far away from Russia. But Medovukha has much less spread. In fact, few people outside of Russia even knew that such a drink exists. Whilst choosing Vodka or Medovukha Souvenir from Russia, you don’t need to be modest (modesty isn’t a Russian trait at all!).

How to drink vodka properly (according to Russian tradition)? You can’t just pour Vodka to yourself, without doing 3 fundamental things prior: the Spirit, the Toast, and the Zakuska.

Each national alcoholic spirit has its own way of consumption. Scottish Whisky is the one you should sip slowly, like tasting. Caribbean Rum is a party drink, best with cocktails and cola. Of course, you can mix cocktails with vodka, too, but the best description of the true Russian way of drinking vodka it was given by Anton Chekhov, the Russian classic writer:

“And you don’t drink a Vodka right away. No, Sir. First, you take a deep breath, wipe your hands and glance up at the ceiling to demonstrate your indifference. Only then you raise your vodka slowly to your lips and suddenly: Sparks! They fly from you stomach to the furthest reaches of your body!”

As per the Russian drinking tradition, before drinking Vodka, you should propose a toast. Toasting is incredibly important in the Russian culture. Not only you shouldn’t drink without toasting, but also you should always start your toast from words “na zdorovie”, or “za zdorovie” that literally translates into English as “for the good health”.
The second one, it should wish the well-being of an event host, or in case, there is no one or many hosts than toast “for friendship” (“za druzhbu!”) is proposed.
After that, you can improvise as you like, but remember – when you are saying a toast; you should pour your Vodka last. It is impolite for a toaster to drink first. 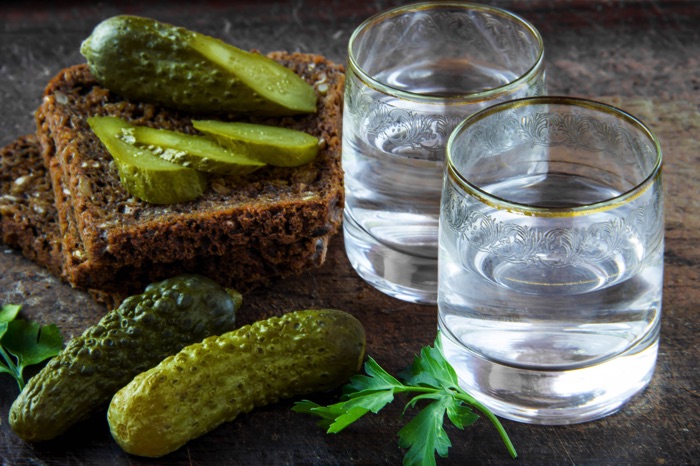 Before you begin drinking, make sure you have something to eat or at least to smell. In Russia we call it “zakuska” – literally means “snack”, but it isn’t that simple. Its history goes back to the traditional Russian ritual of greeting important guests with “bread and salt” (large bread bun and a pinch of salt) – and, in most cases, also an alcoholic drink. Other Traditional Russian zakuska is pickles, salads (most famous of them – Olivier salad, which now has a strong association with New Year celebrations), russian-style toasts and grilled meat(shashlik). The fact is – you should never drink vodka without eating immediately something  afterwards.

Russians never drink without a reason. Most of Russians drink only when there is an occasion. A birthday, wedding, funeral, national holiday – these are all appropriate reasons to drink Vodka. However, it doesn’t need to be so pretentious; you can always make up a good reason for drinking. But the important thing is that you should always have one.

Drinking alcohol at the table with friends and relatives is a common Russian way to celebrate holidays. It is called “Zastolye”. One of the most notorious zastolies, happen on the New Year Eve.

Drinking on the New Year Eve in Russia 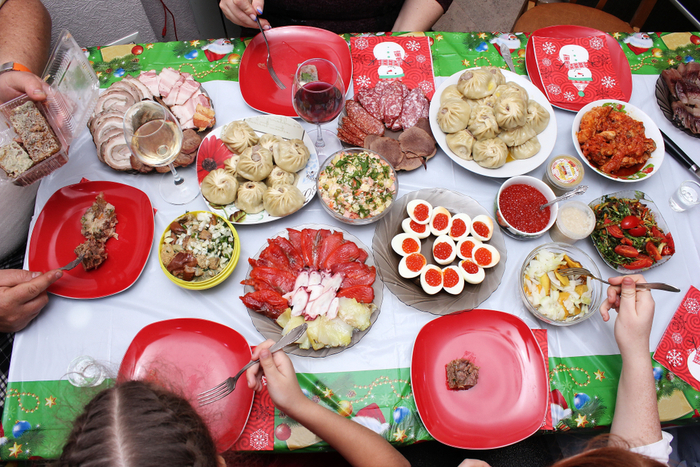 The peak of alcohol consumption in – is the New Year’s eve. Russians have a special tradition of new year celebration, which was formed during Soviet Era, and is very strong even today.

To prepare for a Russian-style New Year celebration, you should perform the following steps:

Five minutes prior to 00:00, all main channels will start broadcasting the President’s new year address to the people. 30 seconds before 00:00, the address will end, and all the channels will show an image of the massive clock on Spasskaya tower of the Moscow Kremlin, counting down all of Russia from the old year, to the new one. At 00:00, it will start playing the Hymn of Russia. Everybody should stand with a glass of sparkling wine in hand, propose a toast “For the new year, to be better than the old one!”, and clink glasses with each other. Then drink to the bottom. After that, continue the celebration in the way you like it! Eager to see this clock tower yourself? It is best to do on our Moscow Kremlin Tour, avalilable daily except thursdays.

Not only Vodka. Alcohol in the life of Russians today

Though Vodka is still a popular product in Russia, and one of its major export products, nowadays Russians – both people and government – are trying hard to get rid of the “world’s most renown drunkards” reputation. Drinking Vodka became a shame for many people, even on holidays. In addition to that, after the collapse of the Soviet Union, Russia opened its markets to the world – and now there are many alternatives to vodka that prevalent in Russia.

Middle-class Russians now prefer Whisky, Rum and Cognac. Sparkling wine, commonly labeled in Russia as “Champagne”, is also popular, but mostly as a festive drink – for weddings, holidays and other important celebrations. Vodka, however, nowadays has a reputation of the drink for low-income people, because it is more affordable. Get the opportunity to discover the drinking culture of modern Russia with our Moscow Night Tour – a ride among the Moscow skyline which ends into one of the best bars of Moscow, or any other location by your choice!

However, despite public hesitation, Vodka is still, statistically, the most popular spirit drink in Russia, and there are some sorts of vodka that you can only find in Russia; just go to any large supermarket and be amazed by the choice!