Saint Petersburg has seen many a battle and many of its locations were once riddled with shrapnel and ingrained with gunpowder.

Courage and resiliency of the city’s population, as well as the craftiness of Russian scientists is often embodied in objects represented in endless array of military museums.The city’s landmarks, too, sometimes quite inconspicuous but always significant, hide the traces of wartime years. Below, we list the top 8 sights to visit in St-Petersburg to get a better picture of the city’s military history.

1. The Military-Historical Museum of Artillery, Engineer and Signal Corps Arguably one of the best and certainly the most visited such sight isThe Military-Historical Museum of Artillery, Engineer and Signal Corps in Peter and Paul’sarsenal. It is one of the largest military museums in the world, with a little something on display for every visitor.

In the museum you can see weaponry dating back to the Stone Age, arms used in Napoleonic wars and World Wars; Soviet tanks and rocket-launchers and even Lenin’s armored-car. In the museum you can also find exhibits devoted to Mikhail Kalashnikov, the inventor of AK-47. 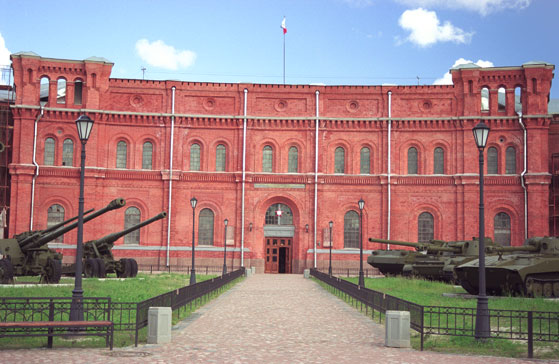 The picturesque armored vehicles make the courtyard an excellent spot for a selfie. To see the sea you should head to Kronstadt, a town built specially to cover the approaches to St-Petersburg.

Kronstadt is known as the pearl of Russian forces and the cradle of Russian democracy. The city, if somewhat forlorn, still houses a large number of the Navy people, giving it the feel of a regimental town.

One could assume that its history will mostly contain stories of conventional warfare, but in fact the sailors of Kronstadt are known worldwide as the catalyst for the revolutions that happened in Russia in 1905 and 1917.

Hostile to what they saw as futile wars and discipline verging on despotism, the sailors played a crucial role in stoking up the 1905 revolution and toppling Tsarist autocracy and Provisional government in 1917. Disenchanted with the Bolshevik dictatorship, in 1921 they revolted against them as well, but were crushed mercilessly.

To see what can be called the Russian Tahrir, head towards the Yakornaya ploschad. The eternal flame at its center pays homage to the sailors who fought alongside Bolsheviki in the October Revolution. These unlikely revolutionaries battled the Old Regime in March 1906, butthe flame says nothingabout those who in 1921, rebelled against the comrades-turned-masters Bolsheviki. Former Russian president Boris Eltsin subsequently issued a presidential decree to build a monument honoring the participants of 1921 uprising, but it remains unexecuted to this day.

Another prominent Kronstadt monument is called The Wall of Glory. The wall commemorates people who defended Kronstadt and Leningrad from the Nazis, often losing their lives in the process.

Apart from memorials to the sailors, you can see a stunning Byzantine-looking cathedral, dedicated to St-Nicholas, standing right opposite the eternal flame. Its interior is unique for the navy imagery it represents.To see and take photos of the Russian Navy’s battleships head to Petrovskaya pristan.

In the USSR Kronstadtwas a town closed forboth foreigners and Soviet citizens. Two reasons for this: first, it was iron-curtained, and second wasthe presence of the Batlic Navy ships and Navy-related industry. It was in 1996, well after Perestroika and the collapse of the Soviet Union that the town opened up and became accessible to all.

From Kronstadt you can easily reach Kurortniydistrict,a location worth visiting to see the Line of Mannerheim and Lenin’s hut in Razliv. In winter, if it freezing cold, you can get over the ice to numerous forts strewn all over the Gulf of Finland. The most famous of them is Kronslodt, the first fort built to defend St-Petersburg.

The Russian tour agency arranges tours to Kronstadt upon request. Another revolution-linked landmark to visit in St. Petersburg is the Aurora Сruiser. It is the main cruiser of Russia and a symbol of the Bolshevik Revolution that took place in Saint-Petersburg, then Petrograd, in 1917. The Revolution marks some of the most significant couple of weeks in the world history.

An active participant of the Russian-Japanese War, the cruiser weathered many a storm and sailed as far as Bangkok before its arrival in revolutionary St-Petersburg. There, a blank round from its guns announced the storm of the Winter Palace by the Bolsheviks and signaled the success of their uprising.

Today the battleship is anchored by Petrogradskaya naberzhnaya and is open for visits. It is swarmed with both kids and their parents, exhibiting friendship banners from around the world and displaying the crew’s quarters.

4.The Memorial to the Heroic Defenders of Leningrad

The monument to the heroic defenders of Leningrad on Ploschad Pobedy is a definite must-seefor every history buff. Set up to glorify the strength, unit and courageof Leningrad, it is also a symbol of the cooperation of its people.

The monument was crowd-funded and built without direct state involvement. The underground section of the museum, a branch of St. Petersburg History Museum, is well worth visiting. To get underground you need a ticket, otherwise the visit is free.

Note: 8th March is a day off; On 27th of January, 23rd of February, 9th of May the entrance is free.
Closest metro station: Moskovskaya.
Address: Ploschad Pobedy, Sankt Peterburg
Guided excursion in English: 300r., all working days except for Saturday
Working hours: Th.-Mon. from 11 a.m. to 6 p.m., Tu. from 11 a.m. to 5 p.m., expect for the last Tu. of the month when the museum is sanitized. The ticket office shuts down at 5 p.m.
Entrance fees: adults 210 ₽; children and retirees 100 ₽.
Website: www.spbmuseum.ru/themuseum/museum_complex/monument_lenigrad/

5.The Museum of the Siege of Leningrad

The vestiges of the Siege are visible throughout the city. It can be a commemorative granite plaque such as one on Institute Francais on the Nevsky, or the scars from Nazi bombs, either on the granite of the Russian Museum on the Griboyedov canal embankment or the columns of St-Isaac’s.

In the city for the moment there is only one museum dealing with the topic of the Siege.It is situated near The Stiglitz Academy.

It is well worth visiting for at least two reasons: firstly, it demonstrates many attributes of the life under siege likewartime newspapers, insides of rooms, orold motorbikes. Secondly, the museum staff is extremely knowledgeable and cooperative; they are ready to assist people in wheelchairs, even though there does not seem to be much infrastructure for it.

6.Museums in the D-2 Narodovolets and C-189 Submarines

One of the reasons the USSR managed to deal the mortal blow to Hitler’s army and navy is its military hardware, especially the submarines, mercilessly stalking and sinking the enemy.

You have a chance to visit one. Situated on the verge of the sea, theVasili Island hidesthe Soviet Union second oldest submarine. Used excessively in WW2, it is famous for plying the Arctic and destroying a lot of Nazi targets.

The submarine reveals the environment its operatorslived in fighting the Third Reich. Among other things the museum features torpedoes and allows to have a look at military documents of the time.

Note: There is no access to the submarine for people in the wheelchairs. To book a guided excursion in English please contact the museum staff, calling 8 (812) 3565277.
Closest metro station: Primorskaya; you are advised to take buses # 7 or # 151.
Address: Shkiperskiyprotok, 10, SanktPeterburg
Working hours: Wed.-Sun, from 11 a.m. to 6 p.m.; Ticket office closingat 5.15 p.m.
Entrance fees: adults 500 ₽., students 300 ₽.
Website: www.eng.navalmuseum.ru/filials/narodovolec

Note: The museum does not offer wheelchair facilities.
Closest metro station: Primorskaya or Vasileostrovskaya
Address: Naberzhnaya Leitenanta Schmidta, Sankt Peterburg
Guided excursion in English: for a group of up to 9 people the price is 4000₽.
Working hours: Wed.-Sun, 11 a.m. to 7 p.m. The visitors are not admitted after 6 p.m.
Entrance fees: adults 400 ₽; children and retirees 250 ₽; children of 6 y.o and under are free of charge.
Website: http://museum-s-189.ru

This museum is devoted to Russian field-marshal Suvorov and is one of the oldest museums in the city.

It boasts a great collection of things related to the commander; Suvorov’s belongings,decorations, and even a stained glass with his portrait.Also on display are the Russian trophies, along with Turkish and Russian banners. A fan of Napoleonic warswill particularly enjoy the museum.

Note: The Museum does not offer guided excursions in English.
Pradiz Russian Tour Operator can arrange for the guided tour in English there.

Closest metro station: Chernyshevskaya
Address: Kirochnayaulitsa, 43, Sankt Peterburg
Working hours: Wed. from 1 p.m. to 9 p.m. ;Tu.-Sun. from 10 a.m. to 6 p.m.; admission of people and sale of tickets and souvenirs terminating one hour before the closure.
Entrance fees: adults and the rest 400 ₽; children of 6y.o. and under free of charge.
Website: http://suvorovmuseum.ru

Recently renovated, the museum is one of the most modern and fascinating in the city. Apart from well-lit interior it features an extensive collection of models, paintings and other objects typifying Russian navy culture. The centerpiece is Botik, a boat Peter the Great found as teenager in one of the Crown’s country estates and thatinspired the development of the Russian fleet.

Apart from aforementioned locations there are many more deserving a visit, but these are the ones that combine different epochs and atmospheres of Russian and St-Petersburg military history.

Pradiz Russian Travel agency can assist you in getting to any of the aforementioned locations.