Stalingrad up Close: A Day Tour of Volgograd 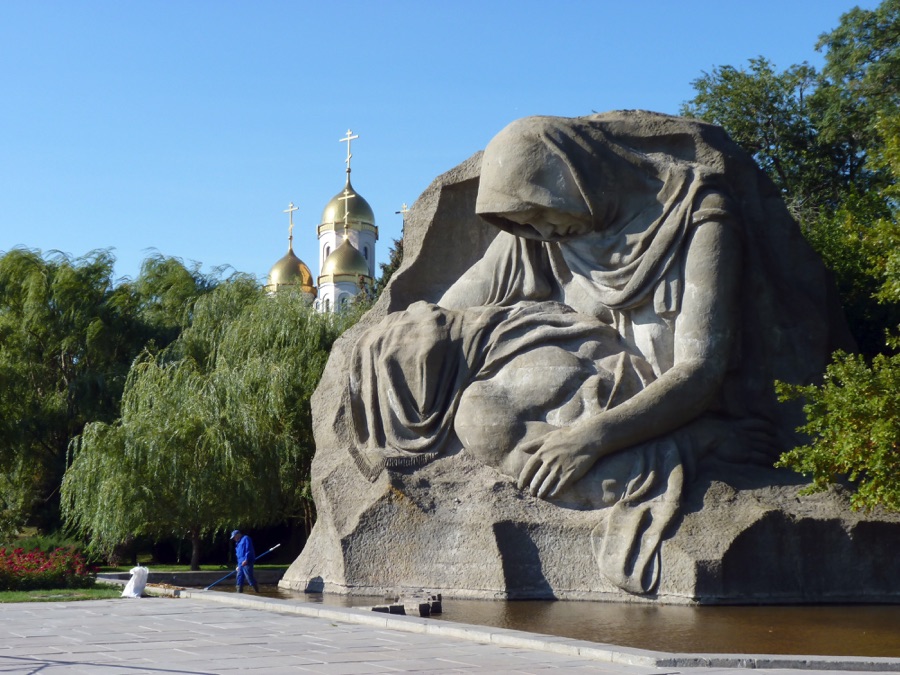 Few places on this planet have had such an enormous influence on history as Volgograd once did. Rested snugly on the Volga River bank, the city formerly called Stalingrad hosted one of the most significant, if not the deadliest battles in human history.
The city is so rich in monuments that you cannot hope to see them all on a single visit. You have to cherry pick. The following suggestions for your Volgograd Day Tour are all about witnessing the Stalingrad battle firsthand. Walking by our side you will gain a profound understanding of what went on during those fatal six months in winter 1942-43.

This suggested Stalingrad Battlefield Tour will introduce you to the most important sights of battle and its aftermath. It includes the visits to:

The tour is specifically tailored for:

9:00 – Your journey starts along the Alley of the Fallen Heroes. Strolling down its tree-lined path, you head away from Volga central embankment to pay homage to a WWII veteran – the famous Poplar. It is the last surviving tree from the battle with many fascinating stories to impart.

Walking down the Alley you reach Square of the Fallen Heroes, the central square in all of Volgograd. Both the alley and the square get their names from the significance of the sights in battle. Namely, it is here that the war for Stalingrad men and women started, here where they took many casualties, and it is here where it ended. The German Field Marshall Paulus was captured in a department store nearby.

The area is a place of great significance for the Russian people. The soaring obelisk in the middle of the square and the eternal flame around it invoke the memory of those who fought in Stalingrad battle.

This Volgograd Tour is part of our exclusive Multiday World War 2 Tour (WWII Tour) that spans across two countries: Russia and Belarus. Be sure to check it out!

Mamaev Kurgan – One of Russia’s 7 Wonders Leaving the square behind you point your gaze upwards, to the iconic Volgograd statue. Your next stop is Mamaev Kurgan, a vast memorial complex built to commemorate the fallen in the battle on their very bones. It is built on an eponymous hill, the highest point in the city and a hugely important strategic point during the war. Staying overnight in Volgograd, it’s best visited during the evening.

The main attraction of the complex is undoubtedly The Motherland Calls! statue, standing at the total height of 85 meters. Walking up to it, you’ll be taking the 200 steps, each step marking a day of battle. Climbing up you first reach the Alley of Poplar Trees, and then the Standing to the Death Square and Statue. Going further up the stairs sided by the Ruined Walls monument you come to the Heroes Square, a pool surrounded by impressive stone figures. A few dozen more and we get to the Hall of Military Glory, a beautiful enclosing hosting an eternal flame that emanates from a large hand sculpture. Watching the guards change their posts is particularly eye-catching. On the way to the Motherland Calls! you’ll pass the Grieving Mother statue sobbing above the Lake of Tears. Reaching the ‘Mama’ as the locals call it is the landmark of every visit to Mamaev Kurgan. We’ll let you see why for yourself.

There’s so much to see here, no wonder that Mamaev Kurgan is called one of the 7 wonders of Russia.

The Images of War – Gerhardt Mill and Pavlov House

After the battle, the city of Stalingrad lay in ruins. Leaving Mamaev Kurgan you can go and see some of that ruin. You can visit the infamous Gerhardt Mill, a historic building that will take you three quarters of a century back in time. After the war majority of the city was reconstructed, but not the Mill; it stands as it stood back in the day, untouched, scarred by bombs that regularly sought to destroy it.

Looking just opposite the street you’ll see another monument, an apartment building this time. Pavlov House by name, its enclosed walls witnessed one of the most courageous displays of military heroism in the WWII. What’s left of it today is the monument to those who defended the position against an onslaught of German heavy forces. Led by Sergeant Pavlov, a group of Soviet soldiers held on for 60 days while Germans threw everything they had at them. Pavlov house is the greatest symbolic expression of the Russian perseverance and endurance during the battle.

With the sense of awe and amazement you leave the ruins and head to the nearby weaponry exhibition. At a strolling distance from Pavlov House you come to an open air Exhibition of Military Equipment. This is one of the largest open air exhibitions of its kind, showcasing weapons and vehicles used in the battle of Stalingrad by all sides. Katusha, Howitzer, tanks, trains, aircrafts; it’s difficult to remain emotionless before these weapons of destruction and mayhem.

There is a lot more to see and do in Volgograd. If your visit to the city isn’t limited to just one day, check out some other great Volgograd attractions.

A visit to Volgograd would be incomplete without a detailed visit to its central, Panorama Museum. Hosting the entire spectrum of wartime exhibits, it is a well thought-out and expertly realized museum that includes some fascinating views of the Volga along the way. 3D maps complement the traditional setup in reconstructing Stalingrad as it once was.
The centerpiece of the museum is the enormous ‘Defeat of the Fascists Armies at Stalingrad’ panoramic canvas painting. It’s the largest of its kind in Russia, with staggering 120m in length. Standing in front of it feels like you’re right there, in the midst of the battle.

The museum is huge. You can easily lose yourself in the poetry of its artifacts. Our guides are keen to share their knowledge regarding each of the exhibits and bring them to life.

Back to the River

Walking along the Volga tops most ‘things to do in Volgograd’ lists. Leaving the museums and artifacts, you  take to the city’s Central Embankment for a time.

Split in two levels, it is widely regarded as the most beautiful embankment on the longest river in Europe. It’s the locals’ favorite place, for a good reason as you’ll agree. Along the 3.5 km on one side you’ll see Victory Park, Museums, The Concert Hall, cafes, restaurants, and the Friendship fountain – the meeting point of the locals; and on the other side the Volga, stretching into infinity.

From the Embankment you can return to where the Volgograd tour started to visit another fascinating place – The Pamyat Museum Volgograd (also known as the Memory Museum). It is an optional visit depending on your energy levels, but well worth your time.

Strolling down the Ostrovskogo Street, just behind the Intourist hotel you’ll see an inconspicuous yellow structure that hides shockingly authentic scenes inside. From Paulus’ study to the haunting Nazi hospital, The Pamyat will stay long in your memory.

You’ve reached the end of our Volgograd Tour. If your appetite for learning is not yet satisfied, then you may consider checking out additional Volgograd attractions and monuments tomorrow. These are equally fascinating and provide a wealth of experience of both the city and its history. The city itself is a monument of human courage and fortitude, just as it stands a remainder and warning against all future conflicts.

This Volgograd Tour is part of our exclusive Multiday World War II Tour that lasts 7 days and spans across two countries: Russia and Belarus. Be sure to check it out!