The sumptuous and giant Cathedral of Christ the Saviour towers above twisting and tranquil Old Moscow lanes and boulevards. It is one of prime Moscow tourist attractions and is visible from afar. It is not only striking in its beauty but also reminds you of Russia’s tragic past.

The cathedral was built in 19th century to commemorate victory over Napoleonic France. It was one of Moscow’s main places of worship until the early years of the USSR when it was plundered and blown up in a fit of explosive atheism. Joseph Stalin planned to build a gargantuan Palace of Soviet, a seat of USSR main legislature in its place; but lack of funds, WW2, and the soil’s tendency to sink all combined to thwart his ambitious plan. In the end the proletariat received an enormous outdoor swimming pool functioning all year-round. After the collapse of the USSR the cathedral was rebuilt and completed in 1997, a present for the 850th anniversary of Moscow from New Russia and a sign of the country’s embrace of old Christian values. All its troubles made the cathedral of Christ the Saviour one of the most interesting places in Russia.

What can you see 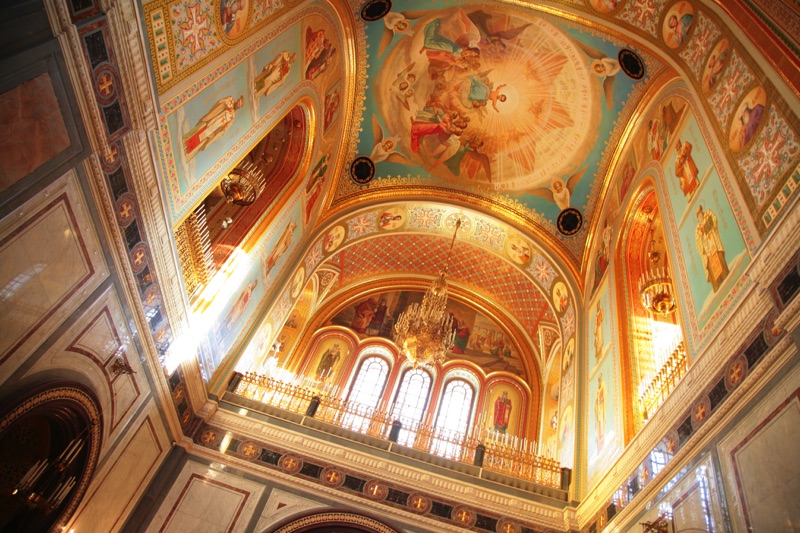 The exterior and interior have largely been replicated. The impressive arched portals, the opulent golden dome, and pallid walls all hark back to the original and bring to mind Moscow’s ambitions to become the Third Rome. The imperial propensities of Moscow are also traceable within the cathedral, where you can contemplate not only the splendor devoted to a deity but also a true altar of history: a recreated gallery displaying marble plaques in homage to 1812 Russian warriors and depictions of battle-scenes. 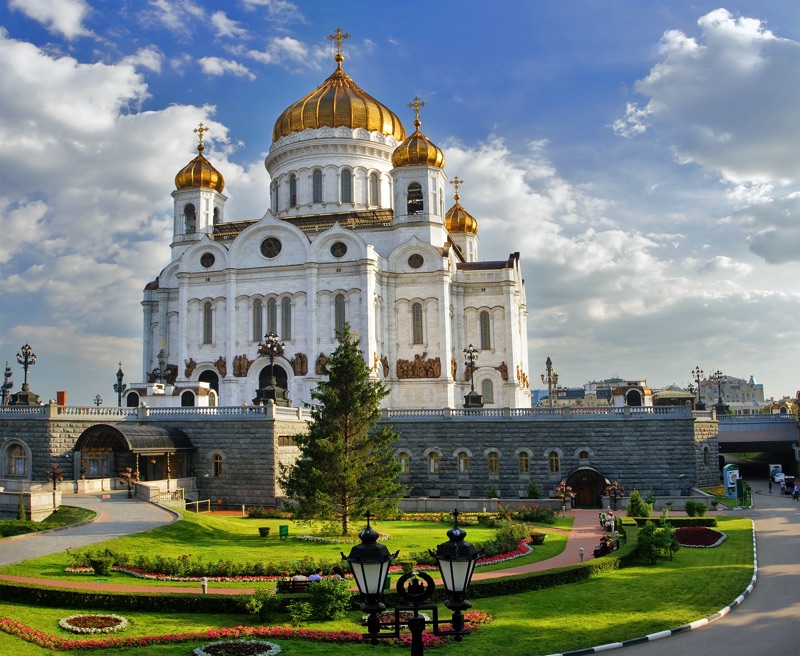 The reverence towards God is expressed by the altar devoted to the Biblical subject of Nativity. Side altars are devoted to Alxander Nevskiy, a revered Russian saint, and St. Nicholas.
What changed is the cathedral’s location. If before the blast the cathedral was located on a hill, after demolition it was levelled. Today’s cathedral sits on a flat base, which also upholds a chapel sheltering one of the capital’s most venerated icons, Christ Not Painted by Hand, by Sorokin, which marvelously survived the destruction of the church. The somewhat up-to-date approach in rebuilding the cathedral is manifest in a 1500 hall, a parking lot for 150 cars, and elevators, which of course have never formed part of its predecessor. Slightly discordant with the old cathedral’s exterior is the bronze relief, which looks somber and sinister, set against the noble pallor of the facade.

What little remains after the old cathedral’s destruction is strewn around Moscow. Benches of the original have been installed in Moscow Underground, in Novokuznetskaya Station, during its construction in 1940s. Some of the high-reliefs once decorating the original church can be seen on a wall of Donskoy Monastery, where famous Soviet writer Alexander Solzhenitsyn is buried. The bits of marble left after the blast were allegedly used to make walkways in Sokolniki Park.

The Russian-Byzantine revivalist cathedral of Christ the Savior, along with old Muscovite St. Basil’s Cathedral on the Red Square and Trinity Lavra of St. Sergius, illustrates the beauty which is unique to Russian architecture. Its Byzantine nuances add to its Russian soul the eastern charm and imperial vitality. 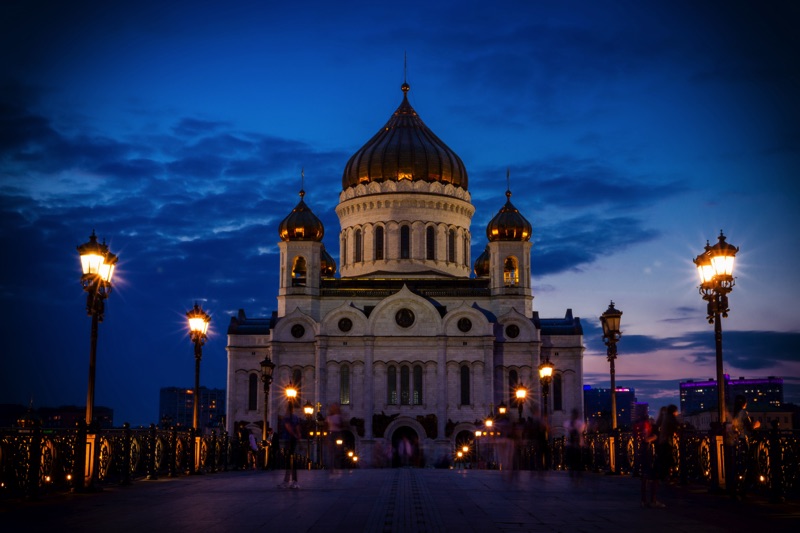 The cathedral of Christ the Savior is one of the most interesting and pleasant places to visit in Moscow and one of the most popular Moscow tours. Its Byzantine monumentality, the initial church was patterned after Hagia Sophia in what is now Istanbul, definitely pleases the eye by itself, but the site also provides a spacious observation deck, which gives a splendid view of the Moskva and is an unmatched spot for sightseeing. Don’t forget that below the cathedral is the Hall of Assemblies, one of Moscow’s most prestigious music halls. If willing to see the Moskva River from new angles head straight onto the amazing Patriarch bridge leading off the cathedral’s environs to the opposite side of the river.

Where is Cathedral of Christ the Saviour situated

The Cathedral of Christ the Saviour is situated on the northern bank of the Moskva, to the west of the Kremlin. It rises above the curving expanse of the Moskva and the Gogol Boulevard with its beautiful Soviet-architecture Kropotkinskaya Metro Station right opposite. It is the nearest station to use to visit the cathedral; it is on the Red Line.

In accordance with Orthodox custom, during the service, there is a certain dress code: men and women alike are not supposed to wear body-revealing clothes. Women are expected to enter the church with head and legs covered. In some Moscow churches and monasteries, you sometimes can borrow a piece of cloth to cover head and legs. Men are supposed to go with head uncovered.