If you look for inspiration in your life, this exclusive tour is exactly what you need. Fascinating interiors of the Great Kremlin Palace will impress and excite you. And if this is your first visit to the city of Moscow, it will become the highlight of your trip.

The price applies if the booking is made 15 days in advance or earlier.

Please book as far in advance as possible.

We can arrange this private tour for 1 – 20 guests for any day (except Thursday) with a 98% guarantee!

* Prices may vary depending on the USD/Ruble exchange rate. Terms outlined in this Important information and Cancellation Policy apply.

What Our Guests Say

“I went on a rare and wonderful tour of the Grand Kremlin Palace with the Kremlin Tour (Pradiz) company. I had wanted to go for years and really enjoyed it. The operator handled everything without a hitch. This is one of a very small number of companies that can arrange a tour of the Palace of the Russian President, with rooms that date back hundreds of years. The palace is one of Moscow’s crown jewels usually only seen on TV.” 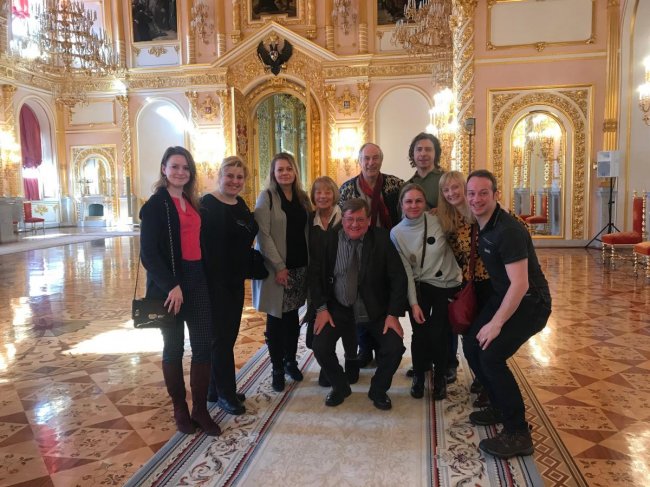 Diana, Pradiz Travel director, guide Snezhana, our loyal customer & partner Victor and his guests from Scottish and Moscow offices on a tour on 20 March 2018.

View their video review of the Great Kremlin Palace tour.

About The Great Kremlin Palace Complex

Five luxurious reception halls are dedicated to the highest orders of the Russian Empire: Georgievsky, Vladimirsky, Aleksandrovsky, Andreyevsky, and Ekaterininsky. Each room is a work of architectural art.

The interior and inner decoration are striking in their grandeur and elegance. The Palace is called the Museum of the Russian Palace interior. The mixture of styles includes elements of the Renaissance, and fragments of Russian-Byzantine styles. Each element impresses with its fine handiwork, originality and taste.

The private headquarters are decorated with an exceptional opulence, where the richness of the Russian Imperial family is highlighted.

Georgievsky Hall. Marble memorials to the memory of the soldiers, awarded with the order of St. George are placed in this hall. Among them Mikhail Kutuzov, Alexander Suvorov and Pyotr Bagration. The hall is 60 meters long with powerful pylons and massive chandeliers made of bronze it leaves a lasting impression.

In 1945 the participants of the Great Victory Parade were hosted there. And Soviet cosmonaut Yuri Gagarin was welcomed in Georgievsky hall.

Vladimirsky Hall. Made in the form of an octagon and faced with pink marble, this hall is the key architectural element of the palace. It is possible to get to the Terem Palace, the Grenade Chamber and many other halls of the palace through it.

Conference Hall. The largest room of the Palace complex with its 18-meter ceilings, it accommodates up to 3000 visitors. During the Soviet period, the Supreme Soviet of the USSR was held there.

Ekaterininsky Hall is named in the honor of the only Russian female order. In the past, it was used as the throne hall of the Russian empresses.

Terem Palace. The palace was built as a ceremonial royal chamber. The walls of the  Palace are decorated with quaint ornaments in the style of the 17th century, and painted with biblical themes. Currently the palace is a part of the ensemble of the Grand Kremlin Palace and is used as the residence of the Russian President.

Faceted Chamber. An architectural monument in the Moscow Kremlin and one of the oldest civil buildings in Moscow. Receives its name from the eastern facade, decorated with a faceted “diamond” rust, typical for the Italian architecture of the Renaissance.

Use this great chance for your Grand Kremlin Palace visit to create memories of the lifetime!

You may wish to post your dates below. If we get several requests for the same dates, we will be able to arrange a group tour to the Great Kremlin Palace during your visit. Please include the number in party and all of the dates you can consider for this tour.