Lviv travel can be truly fun. The picture-perfect capital of Western Ukraine amazes with its authentic Old Europe magic. The region around it features the scenic Carpathian Mountains, with one of Europe’s best ski resorts, picturesque rivers and lakes, and ancient Central European architectural heritage.

Lviv, itself a UNESCO-heritage site, brings to mind the tranquil old city alleys, well roasted coffee-scented cafes, and eye-pleasing basilicas of Cracow and Prague before the arrival of mass tourism. Here, you are bound to feel in a far-off cosmopolitan central European corner of 100 years ago, thanks to a mesh of Jewish, Gypsy, Hungarian and Ukrainian influences, a totally different visual environment from the more Soviet East of the country, shaped by a more industrial and less multicultural past. Enjoy theatre, museums, street art, and kinetic nightlife during your Lviv travel.

Week in Kyiv and Lviv Tour 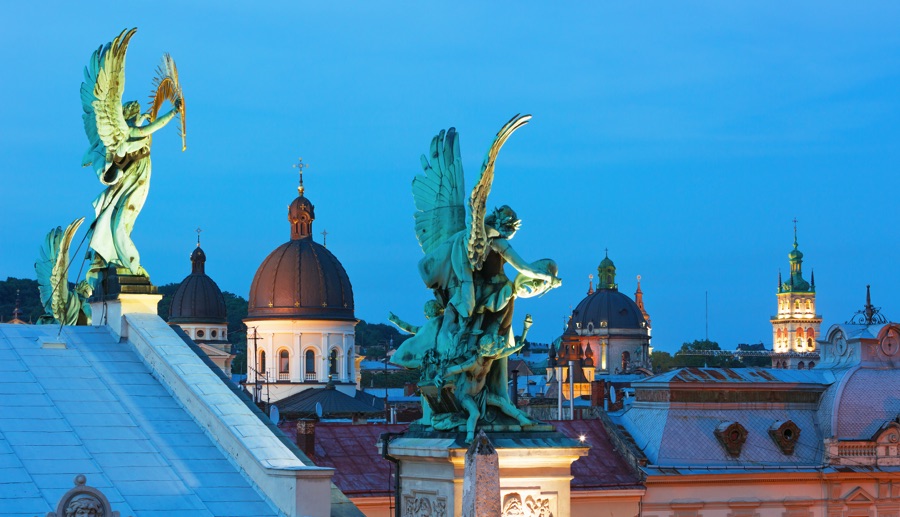 Travelling to Lviv in Ukraine can be great fun. The multitude of historical sites, scenic urban landscapes, location of most sites at a walking distance from your hotel, interethnic and highly friendly population, coexist with booming theatre life, wide choice of eating and nightlife venues, fashionable bars and accommodation. To travel in Ukraine with happiness and comfort read our tourist information on Lviv, and appreciate the beauty there is in Ukraine and Lviv for you.

There is a wide variety of accommodation, and comparing to the rest of Europe it is quite affordable.

Cheapest accommodation in Lviv, Ukraine includes hostels, such as Dream Hostel, Leosphere, Z-One Hostel, Old Town Hostel, Compass Hostel, Centrum Hostel and others low-price establishments, usually available within the range of 10$. If willing to have more privacy opt for the city’s still-affordable hotels, such as Leotel Hotel, delux Hotel Kupava.

Or well recommended but more expesnive Panorama Lviv Hotel, Atlas Hotel, or, five-star Grand Hotel Lviv. Consider renting an Airbnb piece of accommodation if travelling for a longer period of time or eager to have kitchen facilities at hand. 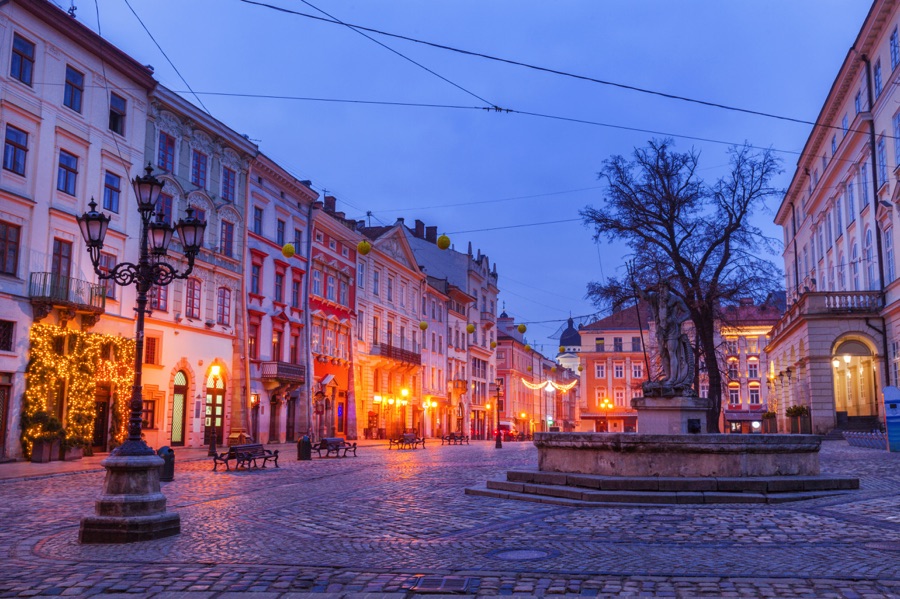 Lviv is by right believed to be the nightlife capital of Western Ukraine and maybe of the Carpathian region as a whole. If going to bar in Lviv, best bars in Lviv city center are Мазох-cafe at 7, Srbska St, running up till 4 am. and fittingly named after the famous writer and Lviv-born aristocrat who inspired the word Masochism; Stargorod, a spacious beer hall at 1, Rymlyanyna St. which works 24-7.

More history-themed locales include Kryivka, in Ukrainian a hideout, is a pub dedicated to the insurgents of Ukrainin Liberation Army, known for collobaration with Germans and atrocities against ethnic minorities, including Jews, so if willing to uncover this side of Ukrainian national identity, «Slava Ukraini» and please welcome. The food is said to be below average and expensive, but the beer is quite decentish and the historical decorations of course are up to the highest standard.

There are many other night establishemnts and pubs in Lviv which work throughout the night, just take a stroll through the downtown, and head where the music drifts from. Best night-clubs number De Luxe, Rafinad People’s Club, Klub na IFEST republic, and Malevich Night Club among many other.

How to get to Lviv Ukraine

You can reach Lviv by car, bus, train, or plane. The easiest and fastest way is by plane via Danilo Halitskiy airport. The direct flights can be taken from most major European airports, but note that as for 2019 no budget airlines operated flights to Lviv.

Buses run between Lviv and other regional capitals in Ukraine, or many smaller towns and villages. It is one of easiest ways to go from Lviv to Bukovel, one of Europe’s most promising skiing destinations, with infrastructure and service by far better then most other former Soviet Union or Central Europe’s skiing spots.

Roughly, the same locations can be accessed by train, which usually takes a little bit longer or the same amount of time. it is probably the cheapest way to travel in Ukraine. For example train from Lviv to picture-perfect Zakarpatie capital Uzhgorod is a little bit over 2.5 euros for more then five hours ride, while the bus there will set you back a little over 10 euros for the same period of time. 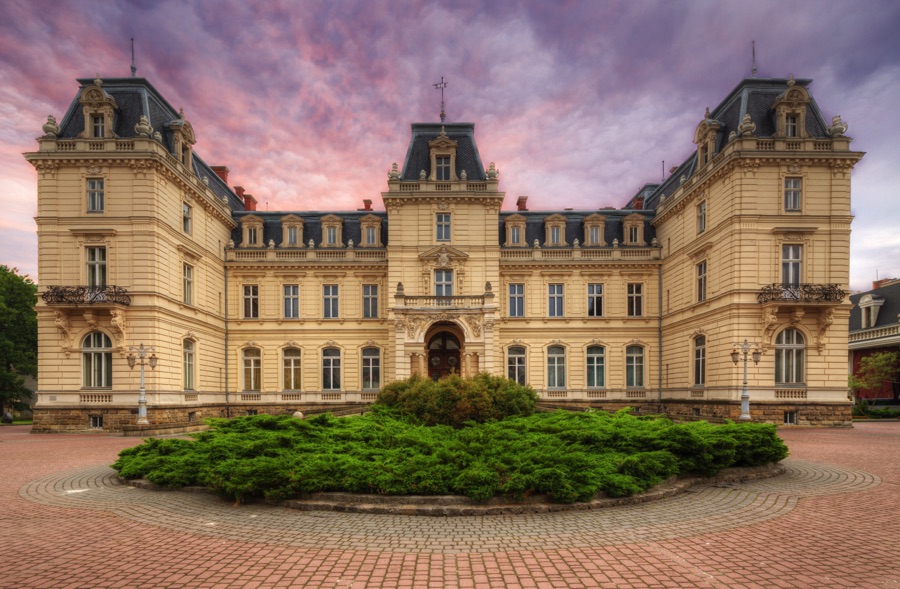 Among the multitude of architecture landmarks strewn all around the city, what truly stands out is the cluster of prime sites in the city center. Gutted and completely erased by fires during Renaissance, the city had to be rebuilt almost from scratch in stone. To witness some of the oldest architecture treasures city center is the best.

Apart from the highlights mentioned above you can see buildings done out in Renaissaince, Baroque or Classical styles in Lviv itself or visit sites outside the city: the haunted 1635 Podgoretskiy Castle and 1390 legendary Olesskiy Castle located in Oless, housing a branch of one of the country’s best art galleries.

Is it safe to travel to Lviv Ukraine

One of the most perilous aspects of your Ukraine experience will probably be travelling by highway. The poor quality of road surface, lack of lighting on the roads, along with consequential drink and reckless driving problems, add up to the poor maintenance of some of the country’s vehicles. If driving yourself, opt for a sturdier vehicle.

Other hazards can include racism, Russophobia and homophobia in areas prone to right wing political activism, theft, bank card fraud, and drop-wallet rort. So avoid public gatherings or walking at night in unknown locations, use only reputable and well-frequented ATM spots, and don’t pick up anything lying on the ground.

Also avoid dating apps such as Tinder, for there have been accounts of drugging and abuse with the purpose of getting money out of you. Head to one of the cheerful and homely bars described in the bar section of this article.

Note that booking Lviv travel packages with Pradiz, will allow you to outsource some of the logistics to the Lviv travel agency and enjoy 24/7 travelling assistance and expert advice, all this in English or another major world language.

Getting a travel agency to assist you will make it easy to travel in Ukraine and, immerse in the un-ending fun which Ukrainian life is. Arguably Europe’s most ambrosial cuisine, some of Europe’s most exquisite pieces of Baroque and Renaissance, truly Slavic open-heartedness and glamour, along with some of the most beautiful people in Ukraine, is what awaits you on your visit to Lviv. By booking a multiday Lviv tour with Pradiz or a shorter travelling experience, you will enjoy expert English-speaking guidance and all-journey travelling assistance. Pradiz, a Lviv Travel Agency is one of the most reputed and proficient tour operators in former Soviet Union, known for top-notch services, first-source tourist information,  and meticulous attention to its customers.