Pradiz is pleased to share that our great travel services were appraised by the president of the Brazilian Football Confederation, Rogerio Caboclo, who was our guest in Moscow. It has been an honor to present Russia’ capital to a such renowned football professional. His visit was performed in collaboration with Torcida Brasil with which we setup all details about his trip of the whole CBF senior management delegation.

Pradiz was chosen among its prime travel industry peers and prove that it is one of the leading Russia’s travel companies. Our team greeted the CBF president and his spouse and headed to visit some of the most scenery places in Moscow.

His visit was mainly focused on the 2018 FIFA World Cup held in Russia’s capital city from 14th of June to 15th of July. It was the first time that this tournament is presented in Eastern Europe and including the video assistant referee (VAR) system. Initially, Russia proposed having the tournament in the following host cities: Kaliningrad, Kazan, Krasnodar, Moscow, Nizhny Novgorod, Rostov-on-Don, Saint Petersburg, Samara, Saransk, Sochi, Volgograd, Yaroslavl, and Yekaterinburg. Three of the 16 stadiums in these cities were renovated, and 13 were newly constructed.

Of the twelve venues used, the Luzhniki Stadium in Moscow and the Saint Petersburg Stadium – the two largest stadiums in Russia – were used the most, both hosting seven matches. Sochi, Kazan, Nizhny Novgorod and Samara all hosted six matches, including one quarter-final match each, while the Spartak Stadium in Moscow and Rostov-on-Don hosted five matches, including one round-of-16 match each. Volgograd, Kaliningrad, Yekaterinburg and Saransk all hosted four matches, but did not host any knockout stage games.

“We would like to thank the travel agency PRADIZ for the support of our Brazilian clients during the World Cup in Moscow in 2018.

We are very satisfied with the fast, safe and efficient service of the operator in all our needs.

We used services for our guest, and they also were very pleased with the guides”, share Fernando Nunes Torcida Brasil representative in their recommendation letter. 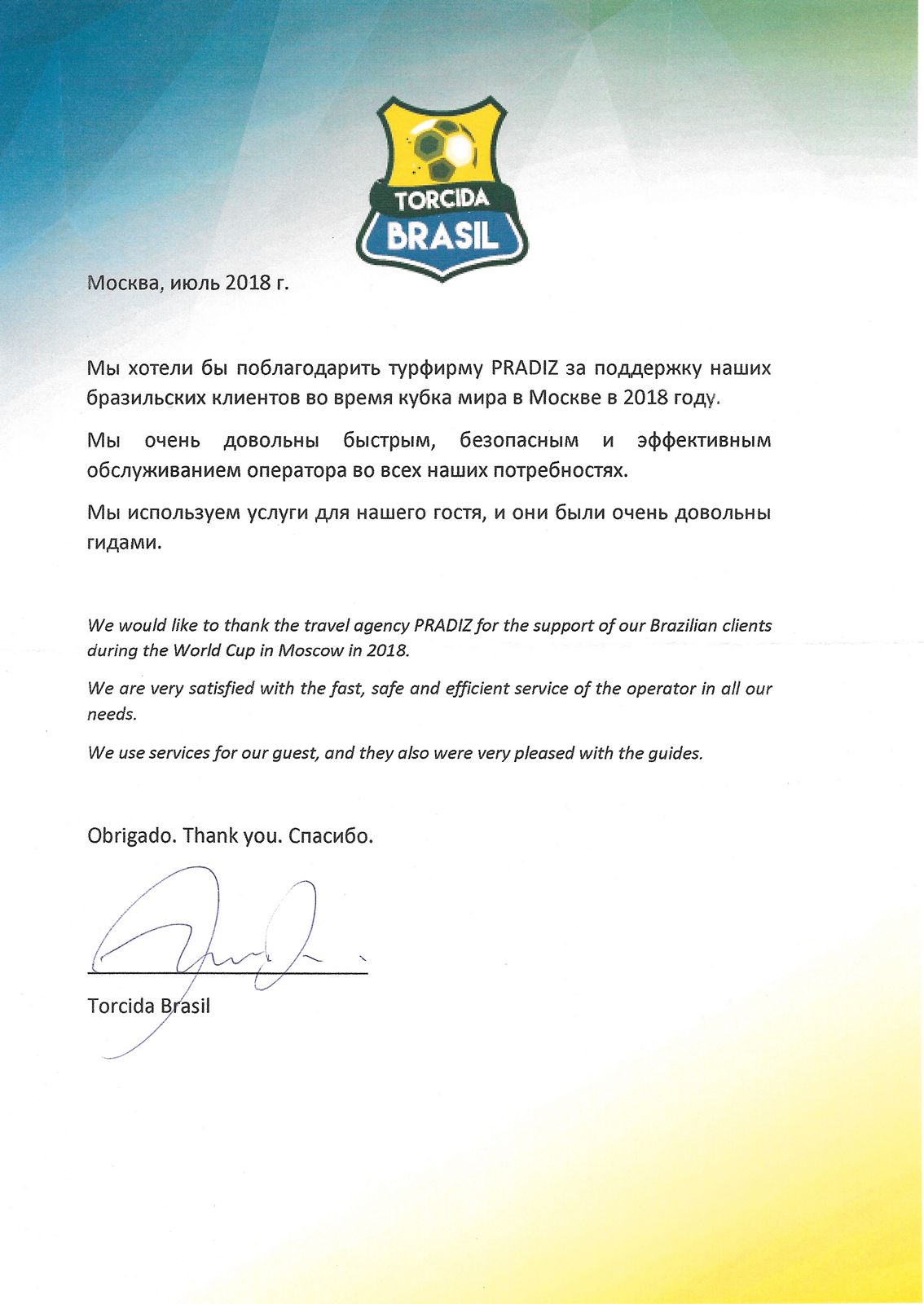 We, at Pradiz, were very excited about this opportunity to cooperate and meet with the top managers of one the world’s best football teams.

We have been providing one of the top quality services in the country since 2011. As a registered tour operator and travel company in Russia, Pradiz confirms that will maintain this outstanding tourist guidance level and will provide you even more opportunities to explore our beautiful place.

If you foresee a vacation in Moscow, we are on your side and will help you to have the best time here and also in desired cities in Russia.