Moscow sightseeing will leave a lasting impression on you – no matter which landmarks you’ve decided to visit. But there are some places that should not be left out of consideration. In this overview, we’ll tell you about one of them.

Tsaritsyno Museum, the special pride of Russian capital, will welcome you with magnificent Gothic buildings, picturesque landscapes, and the fairy-tale bridges, each of which shows its own unique “theater performance”. Built in the late 18th century as a suburb residence of the Empress Catherine II, this splendorous architectural complex is surrounded by multicolor flower walks, purified ponds, manicured parks, and ultramodern dynamic fountains.

It’s undoubtedly one of the best places to visit in Moscow, both in summer and winter. Let us plunge into the history of this legendary attraction, so dignified, yet welcoming and comprehensible to every visitor.

From the History of Tsaritsyno Museum The construction of this residence started in 1776, when Empress Catherine II, inspired by the incredible beauty of this virgin scenery, asked architect Vasili Bazhenov to built a palace, “moorish” yet harmonious with the surrounding nature. When the building was almost ready, the Empress announced that it should be destroyed; in her opinion the new palace didn’t suite for living.

The second stage of construction began in 1786, when architect Matvey Kazakov offered a new architectural plan of Tsaritsyno, and Catherine the Great approved it. Unfortunately, the construction was interrupted by the Empress’ death, and the unique residence remained almost destroyed for more than 200 years, until it was totally restored in 2007.

Today, it’s one of the most interesting places in Russia, and it’ll take you more than 3 hours to explore the park on foot.

In order to get to the Park, you can apply to Uber or Get.Taxi services or take the Underground to Tsaritsyno Metro Station.

If you opt for public transport, get off the Metro and walk under the railway line – the destination point is in a 5 minutes walk. The part of the city near the Station is in sharp contrast to what you see in the centre of Moscow. This is mostly because of the regular train station situated here: you’ll see the crowds of common people hurrying to different dormitory districts of the capital and out of the city; most of them are not accustomed to seeing tourists and foreigners. Besides, travelling by Metro, you’ll get the opportunity to enjoy not only the beauties of Tsaritsyno, but also some local Russia experience. 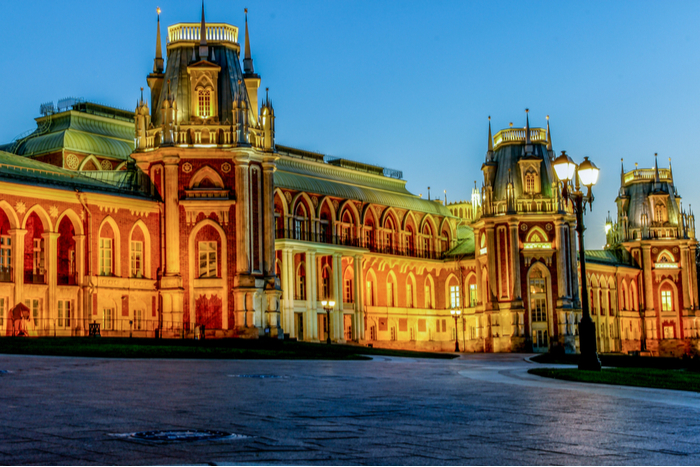 What can you see in this fantastic place of interest? There are many wonderful constructions, heritage assets, and adorable elements of landscape that are worth seeing. In this material, we’ll describe only the most glorious parts of Tsaritsyno Park Moscow. If you want to read about the rest of them, check out new articles in this blog.

The Grand Palace. It is the leading element of the ensemble, built in Gothic style with eight towers and marquees. The three-storey Palace looks like a medieval European castle and consists of several towered square side halls connected by galleries.

The singing fountain. It’s one of the greatest tourist attractions in Tsaritsyno. 3000 lights and 1000 jets are dancing polonaises and minuets every evening, creating the unforgettable atmosphere of a fairy-tale translated into reality.

The Big Bridge. Being the biggest surviving bridge of the 18th century, it is decorated with rosettes mimic portals resembling the ones of Gothic cathedrals. This massive construction visualizes Bazhenov’s “theater architecture” with its vivid, romantic details.

Your Moscow tours would not be complete without visiting these beautiful cultural sites, as well as the Temple of Ceres, the Mermaid’s Gate, the Church of the Icon of the Mother of God of the Life-Giving Spring, and the Figured Gate.

Park Tsaritsyno in All Seasons 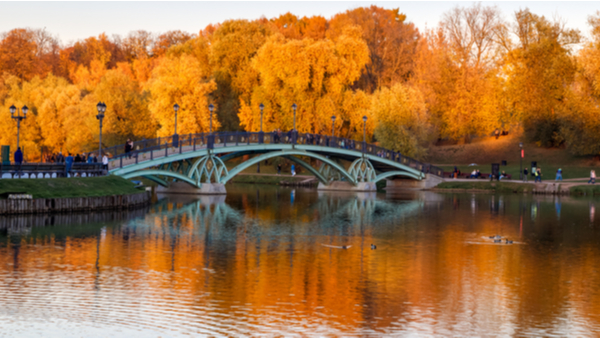 This picturesque Moscow park captivates visitors with its beauty in spring and summer, when everything is green and flourishing, and in autumn, when the ground is covered with the carpet of orange and yellow leaves.

In winter, the place acquires an absolutely new mood – the one of authentic Russia, so frosty, yet bright, generous, and benignant. If you visit Tsaritsyno Museum in cold months, get ready to enjoy the unfo

rgettable reindeer sleigh rides and dog sled rides, ski in the parks of this residence, and take part in traditional Russian outdoor festivals.

Being one of the greatest historical monuments of Moscow, this former imperial residence is under constant safe custody. It is therefore not allowed to walk pets and roller-skate in this Park. But good news – there are many romantic places where you can sit and have a rest, while in winter you can enjoy its excellent ski-tracks.